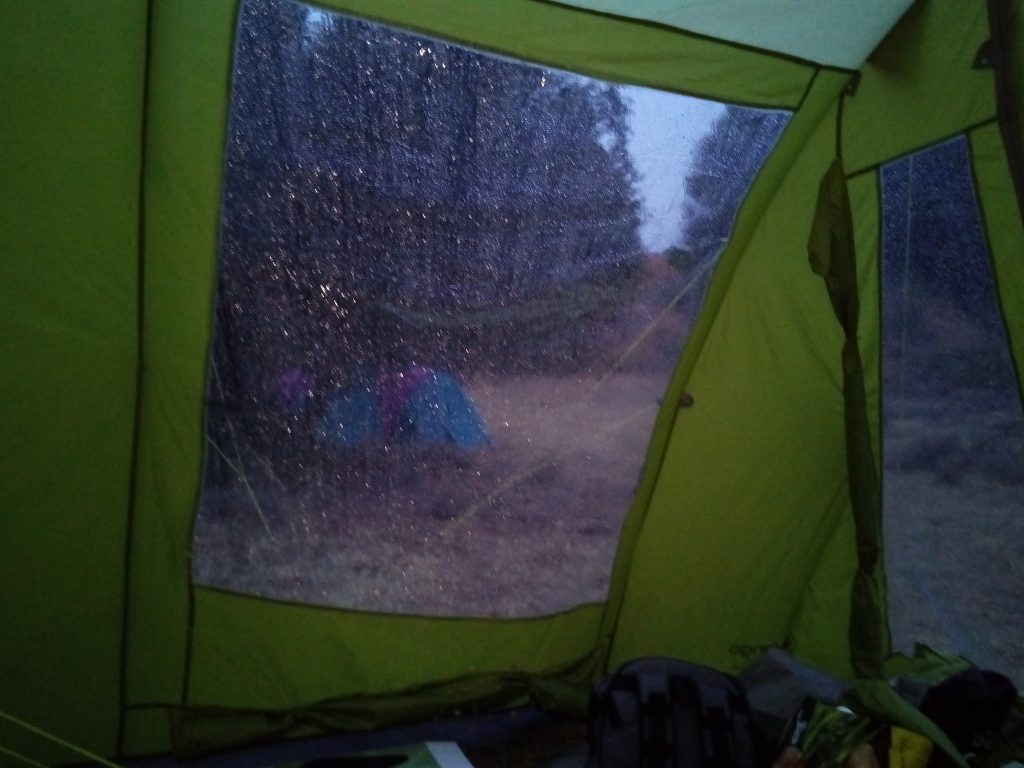 In late August/early September, we went to Matarranya by car so that I could take some equipment to set up a webcam to watch the building work on our house as well as keeping an eye on the local wildlife. We thought that it would be a great laugh to buy a tent and actually sleep on our land for the first time. Everything was very dry, it being full summer and we anticipated no problems.

An easy decision was made to stop over in the lovely town of Logroño in north western Spain because it wasn’t far off our route. Primarily, this was because we had watched Alex Polizzis TV series on Spain and the tapas in Logroño looked fabulous. Well, it didn’t disappoint. There are hundreds of tapas bars, small and large, with thousands of people wandering the baking streets and sampling the delights. As the sweltering day meandered into the cooler, more bearable evening the tapas came on display and the street feasting began.

Like vast herds of wildebeest, the local Spaniards graze their way from watering hole to feeding grounds and we followed like an Attenborough camera team. As the evening progressed, more and more we saw La Trompa, the local name for the drunken walk during a well refreshed night out by the local wildlife. I think it describes the trumpeting sound made by an elephant so if you imagine the way in which elephants walk, swaying from side to side, you get the idea.

Sadly, we’d only planned one night stop in tapas heaven and only a few hours drive saw us pulling into our local town of Valderrobres. We had booked an apartment for the week, the whole camping thing being just a bit of fun. With temperatures hovering around 42 degrees, I was ready with portable fans to stop us turning into small, sweaty puddles in our flimsy tent. The countryside was dry aftera couple of  months of little or no rain and baking sun. Our olive trees, whilst laden with fruit, were looking rather sad. The olives had a shrunken, shrivelled look and were clearly in need of a serious drink. I did despair slightly that the crop might be ruined due to the lack of rain. 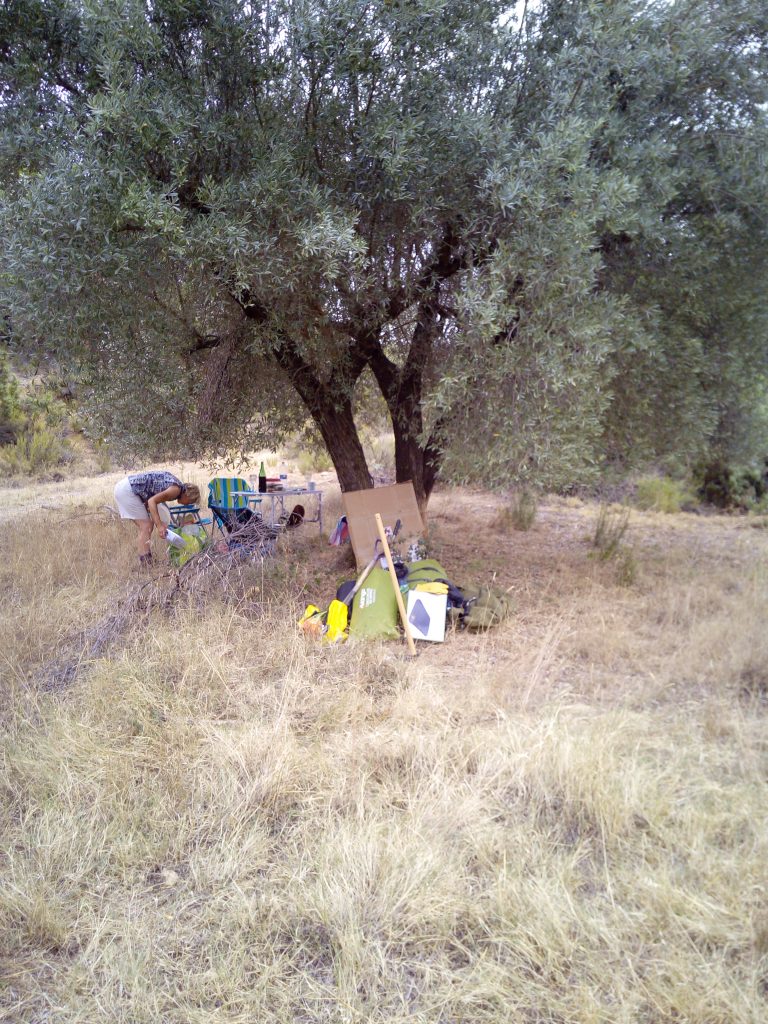 Of course, I needn’t have worried as, being a rain god, those heavenly droplets can’t resist falling on me and about an hour after setting up camp, the heavens opened and a huge storm hit. What is it about tents, Brits and rain? It must be in our DNA, I guess.

It rained heavily overnight for about 12 hours, the water got in everywhere and we were soaked throughout the night…at one point, I seriously began to wonder if the tent was going to be lifted up with us inside and blown over the cliffs; an ignominious end to our Spanish Dream in a broken heap at the bottom of the valley.

Of course, with the storm also came hailstones and plummeting temperatures. We had only taken thin sheets, anticipating baking not freezing and spent the night huddled together, extracting heat from each other like a pair of thermal vampires. As the first light broke, I was fully awake to see that the clouds had more or less cleared and I was greeted with a glorious dawn breaking and the welcome return of the sun as it streaked across the mountains. It’s welcome warmth encouraged me to venture out to forage (in the back of the car) for coffee-making and breakfast materials.

We’d had a visitor during the night, a fox by the looks and smell of it. There wasn’t too much damage, but the remains of last nights supper was nibbled and spread around the campsite, although that could have been helped by the wind during the night. Next time, I’m setting up the game camera! We’ve already taken some pictures of a large-eared fox at the watering hole, so maybe it was our nocturnal visitor. 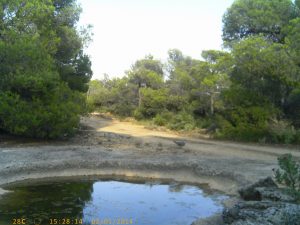 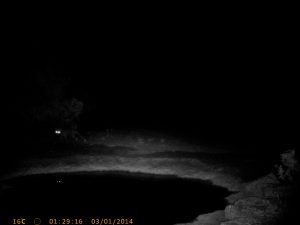 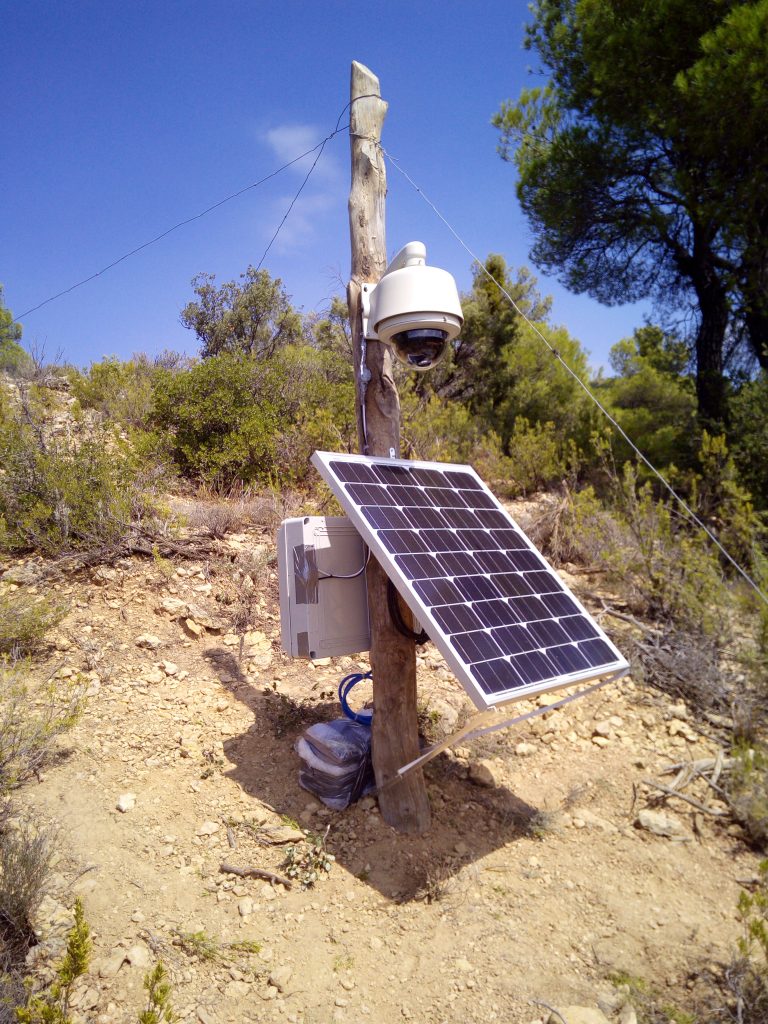 I bought a fabulous camera from Ebay with full control of pan/tilt and 18:1 optical zoom in a weather proof enclosure. Of course, as we have no power systems installed yet, clearly the only option was to build a standalone solar battery system.

The picture shows how I mounted it all. Basically, I found an old beam from the demolition of the  house and dug it into the ground. Unfortunately, I could only  dig down about half a meter until I hit rock and, lacking any large drilling tools, I couldn’t go any further. However, I found some old wire fencing which had been part of a sheep enclosure and stripped it down  so that I ended up with a length of galvanised wire.

Three of the heavy tent pegs were rapidly repurposed to hold the stays in place and the control box was mounted at the base of the post as you can see in the photo. The box contains the solar battery charger and a mains inverter to convert the 12V from the battery to 240V to power the camera which is, oddly, powered by AC instead of the more usual 12V or 5V DC.

The battery is visible at the back of the post, on the ground, wrapped in bubble wrap to protect it from the cold during the winter. Lead acid batteries aren’t too fond of freezing temperatures, so a bit of insulation goes a long way.

The camera is sitting on top of a rocky knoll which overlooks the small plateau where the house is situated and looks across the valleys and hills towards Peñarroya de Tastevins which will be the source of our wimax internet access. 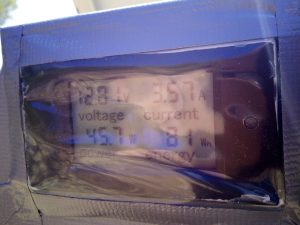 These photos show the control box with a close up of the little charge monitor that I decided to incorporate just to check that everything is working well. It shows the battery voltage, the charging current, the instantaneous charging power and the total amount of power generated by the solar panels. 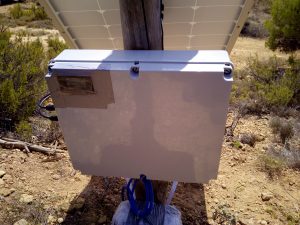 Sadly, it being August, we couldn’t get anyone out to install the internet system so the exciting bit is yet to come. I’m heading back down to Spain next week to meet up with Jordi who is going to install our wimax dish which will give us a 15 Mb/s data  rate, which is way faster than our UK home system.

I’ve just come back from Mattaranya and have had the WiMax intenet access system installed.

The picture  here shows the active antenna which is now mounted on the post above the camera. It points towards Fuentspalda which is where the internet access mast is 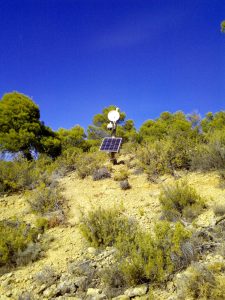 positioned. In fact, I could pick up the access point wifi signals on my Android tablet, it’s so strong! unfortunately, I discovered that the combined power consumption of the camera, wimax antenna and the router is a bit much for the leisure battery to last overnight – probably due to couple of cloudy days and the cold nights now, which force the camera heater to engage. So, for the moment I’ve had to install a timer to turn everything off at night.

My new project is to design a circuit to monitor the charging power and the battery voltage and to turn the camera system off when the battery voltage reaches a preprogrammed level to preserve the rest of the system. As a bonus, I’m going to connect this unit via the internet with my Raspberry Pie in the UK so that I can monitor the power generated by the solar panel and the amount consumed by the electronics.

This will be interesting in itself as it’ll give me an idea of how much power I can expect to be generated by the larger solar system throughout the year, when it’s installed. As a final extra, I realised that whilst there isn’t much wind in the summer, there can be a decent amount in the autumn and winter. So, I’m now investigating putting a small wind generator on the camera pole as well. I’ll monitor this along with the solar panel and the next year will tell me if it’s worth installing, say, a 1 kilowatt wind generator as an adjunct to the solar panels so that we never have to rely on a generator.

I’ll do a separate update on this as the experiment progresses.