After a lot of research regarding solar chargers and mains inverters, I settled on the PIP4048MS from Mppsolar. This is a lovely device which can take up to 3KW of solar panels and will give up to 4KW of pure sine mains power at 230V. 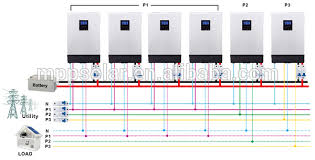 So, why did I choose this particular unit over the thousands of different pieces of kit out there in the market? Well, first it incorporates both functions of solar charger and mains inverter into one, second it’s also an MPPT charger, third you can parallel up to 6 units to handle up to 18KW of panels and give out 24KW of lovely mains power. This is more than many houses will get from their national mains grid.

Why do I need so much power? Well, my abiding principle is to have everything electric… Heating, cooling, cooking, hot water, the lot. I’ll have a bit to say in other posts about each of those elements as I develop the hardware to handle them

I guess that I’d better explain a few of those terms that I mentioned just now:-

This stands for Maximum Power Point Tracking. What it means is that the solar charger will extract the most power that it can out of your panels and dump it into your batteries. In full sunlight, there’s not a lot of difference, from standard chargers, but as light levels drop towards dark or on cloudy days, you’ll  get more power out of MPPT than other systems. In a nutshell, it briefly disconnects your panels from the batteries to allow the panel voltage to float to a higher voltage than the batteries and stores that power in a bank of capacitors. Then when there’s enough to be usable, it dumps it into the batteries and then starts again.

Other versions of MPPT use circuits called buck converters to give a higher, more usable voltage than would otherwise be available in low light levels leading to an even more efficient extraction of the energy from the available sunlight.

Mains Powe is alternating current, AC, whereas solar panels and batteries give out direct current, DC. Mains inverters convert the DC from the battery/panel combination so that you can power your mains gadgets like televisions and essentials like dishwashers. The AC from the power company is generated by huge alternators which are generally driven by steam turbines. As the alternators rotate, the output voltage rises and falls smoothly, generally 50 times per second in Europe (50 Hertz or 50 Hz) and 60 Hz in the USA and Canada.

The smooth rise and fall is vital to many types of motor, especially those in refrigerators, air-conditioning units and the like.

So, mains inverters come in two flavours. There are the cheaper, digital, ones where the voltage output, for reasons of economy, are generated by a digital circuit. Digital stuff normally isn’t very good at smooth transitions and prefers small steps or jumps.

The more expensive inverter gives out a smooth voltage change or pure sine as the output exactly mimics the output of a rotating alternator. This is better, but generally more expensive, than the digital version. On the other hand if your fridge or aircon doesn’t work, then that could be even more pricey.

As our new house is to be built in a hot climate and we really need good aircon, theres no choice. Hence, the PIP4048MS.